I start this blog with an apology. There may be people reading who, like myself, look back with frustration and despair that they cannot change the years they spent dependent on antidepressant drugs or the approach they took when stopping. I recently passed my second anniversary of being off mirtazapine, a highly sedating, anti-histamine type drug. As for my progress in that time, all that I can say is that I still have a lot of healing to do. Some people commenting on my continuing difficulties point to how I tapered, particularly my use of tapering strips. However, I believe there is an important factor in difficult withdrawal that needs consideration, and that is exposure time. For those of us, again like me, who cannot turn back the clock, this can be painful to consider and for that reason, I apologise if this note upsets anyone affected.

I first became interested in antidepressant withdrawal in 2016. This wasn’t by choice, it was forced on me, like so many others, because I became aware that the person prescribing my drug had no idea how to stop it safely. They only really seemed interested in getting me on and increasing the dosage despite my protestations that I felt worse while taking it. 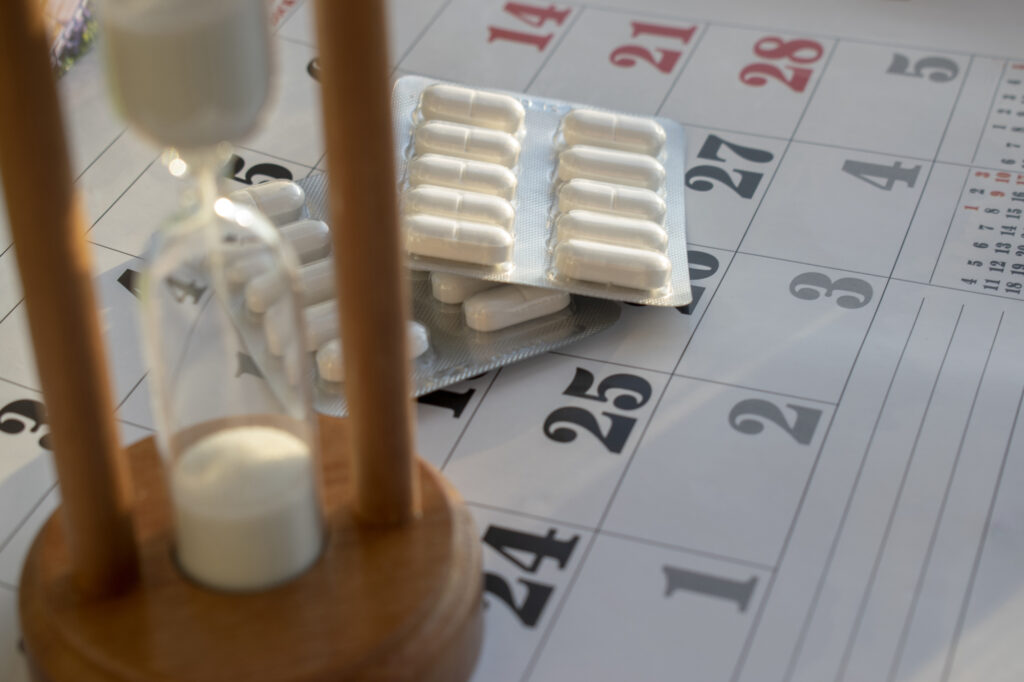 During my withdrawal, I became a willing member of a large group of people voluntarily providing support and encouragement to others navigating the complexities of getting off antidepressant drugs. While the vast majority of support group interaction is invaluable, I became aware of approaches that are potentially less helpful. Since running my discussion group, Let’s Talk Withdrawal, and being involved in many others, I have come to find that there are times when the individual nature of a person’s experience is ignored and they are all given similar advice. I have had people contact me privately to say that they were thrown out of other support groups because they didn’t want to rigorously stick to the “10% of the previous dose” tapering strategy that has achieved almost mythological status in lay communities. Ten percent of the previous dose is a good starting point to reduce symptoms but it isn’t right for everyone. The biggest problem with it is that it leads to very long tapers which increase the person’s exposure time to the agent that might well be causing their difficulties. There is a prevailing view that how you withdraw sets your future circumstances. That may be part of the equation but it is not the be-all and end-all.

It is important to say that long-established withdrawal advice sites, including the Inner Compass Initiative and Surviving Antidepressants, do not advocate a fixed approach or a fixed reduction schedule. The advocates and supporters who advise at these sites know the complexities caused by polypharmacy and the need to tailor an approach to each individual. Sadly, the same cannot be said for all withdrawal advice given in online forums. Much of it comes from a good place but some advice is too restrictive and not given in full consideration of a person’s unique circumstances. The 10% per month of the previous dose is a suggestion, not a target. It won’t work for everyone, it will be too slow for some and too fast for others. We need to distinguish ourselves from naïve prescribers by being open to all methods of withdrawal and all speeds.

As an example, for someone coming off a 20mg dose of citalopram (Celexa), a “10% of the previous dose per month” strategy will require them to take 29 months, over two years, to reach a 1-milligram jumping-off point. For someone who has been treated for decades, this seems sensible; for someone treated with the drug for a year or two years, the tapering might well double exposure time. People might argue that this additional exposure time is at a lower dose. This is true but, as we have seen from recent work on serotonin occupancy by Dr Mark Horowitz, many SSRI-type drugs retain much of their potency at low dosage levels. For example, looking again at citalopram, this drug will retain more than 40% of its effect at 5mg. On a 10% per month schedule, this point will not be reached until 16 months into the taper.

It is difficult to say this without fearing that it may make some feel hopeless but a gradual withdrawal is not a magic bullet in avoiding problems during tapering or protracted problems afterwards. We do not know nearly enough about the many complexities in the withdrawal experience to know what is the right approach. However, by insisting that everyone follows a similar path, we might inadvertently be prolonging the suffering. Although it sounds glib, the right withdrawal rate is one that you find tolerable and one that doesn’t require major life adjustments to cope with. That is going to be different for different people and may also vary during the taper. Many will be willing to tolerate a more uncomfortable withdrawal period if they can limit their overall exposure time.

It is very difficult to think of a way that this could be empirically studied as it would be unethical to potentially cause suffering by forcing people to comply with different reduction rates that didn’t meet their needs. The lack of a randomized, placebo-controlled study has been seized on by some psychiatrists as a reason to reject the need for gradual tapering approaches but it is hard to see how this can be studied other than with a large naturalistic, qualitative study that does not impose tapering strategies.

I’ve known people who have been forced to take five years to come off a drug and thoughts of the speed of their taper and whether they have got it wrong occupies every given moment. Maybe that person would be better off reducing more quickly and getting to a stable position faster. I took 2.5 years to come off and, against the conventional wisdom, I speeded up as I got to the smaller dosages. Was that the right thing to do? Who knows? I will certainly never know because I can’t repeat the experiment a different way. Though I can’t prove it, I don’t believe that my continuing problems are a result of either the way I tapered or the time I took. I believe it is a direct consequence of spending seven years and eight months, including tapering, on a dependence-forming drug.

At the time of my withdrawal, I was lucky to have the support of a helpful and much-respected psychotherapist. He tried very hard to motivate me to go quicker but my confidence failed me. The reason it failed was that I had been influenced to accept that the slower you go, the better you will feel and the less chance there is of long-term difficulties. Looking back now, my adviser was completely right. I suspect now that I could have come off in a year or less and been exactly where I am now but with 18 months less exposure time.

Going through withdrawal yourself only qualifies you in your own experience, it doesn’t tell you a great deal about other experiences. If you find yourself in a support group that forces you to engage only in a certain way, then find another, more open, more welcoming group. There is tremendous work going on in the lay community and I stress that these rigid approaches are the exception rather than the rule but we need to best support the person withdrawing by delivering their needs, not our preferences.

Another issue that those participating in support or discussion groups will often see is people arriving on the maximum dose of an antidepressant, having sometimes been labelled “treatment-resistant” because they didn’t respond any better as the dosage got higher. When a group of psychiatric researchers studied what they called ‘optimal’ antidepressant doses, they found that in the seven drugs they selected (citalopram, escitalopram, fluoxetine, paroxetine, sertraline, venlafaxine and mirtazapine) “the lower range of the licensed dose achieves the optimal balance between efficacy, tolerability, and acceptability in the acute treatment of major depression.” Put simply, the long-standing recommendation by the American Psychiatric Association to “titrate up to the maximum tolerated dose” has been called into question by psychiatry’s research.

As Peter Groot, developer of tapering strips, often reminds us, our approach to dosage when prescribing antidepressants is so limited as to be almost laughable. The standard dosages available for people are the equivalent of going to a shoe shop and being told “you can have any shoe you like but we only have them in size 5 or size 12”. Told this, we would rightly laugh at the limited choice and go elsewhere. Unfortunately, where antidepressants are concerned, there is nowhere else we can go. A 120-kilogram man will end up on the same dosage as a 60-kilogram woman with little to no account taken of their physiology. There may well be some prescribers who do take account of physiology in their prescribing but they are the exception rather than the norm. An athlete will end up on the same dosage as someone inactive, a pensioner will end up on the same dosage as someone in their twenties. Far from “precision medicine”, these standard dosages have been arrived at by looking at group averages in short-term trials. You might be lucky and fit neatly into one of these “dosage boxes”, but you are just as likely to be taking more than you need for a response.

Many of you will have pets and will have taken them to the vet where you might get a prescription. Often you will find that the dosage is in milligrams per kilogram of body weight. Can we do that for our pets but not for us? The need for variable dosages and variable tapering strategies has never been more important. The number of prescriptions for antidepressants is rising fast; more people each day are being put onto drugs that they might have difficulty getting off.

We are compounding the problems people have in tapering both by prescribing for too long without review and rapidly increasing dosages to the maximum suggested level seemingly based on guesswork. Then when the person finally realizes the limitations of the advice that they have been given, they are often side-lined by their prescriber or labelled “treatment-resistant” and left to fend for themselves.

Thanks to the efforts of many professionals, activists, advocates and those who have experience, we are starting to make progress in responding to the challenge of getting off antidepressants. However, to make sure we help the many, we need a nuanced, flexible and open approach to helping people off the drugs. For some people, coming off in two years might turn out to be as problematic as getting off in two weeks. We are all learning as we go, but in contrast to mainstream psychiatry, we need to avoid a fixed view of the methods and timescales that people might choose to put their antidepressants behind them.