Breakdown Bolton is a peer-led organisation in the North West of England.  We run high quality arts projects, often working with stigmatised groups, such as people who have experienced mental health difficulties. We are passionate about breaking down the barriers and challenging the stigma that our clients face, both internalised and societal. Find us on our website, on Instagram or Twitter.

Introduction to the workshops

By definition, identity is the core of who we are as individuals and how we see ourselves. For centuries, people have used art as a way to explore, express, and understand their own identity. The quest to understand identity has more recently been taken up by social scientists, researchers, and psychologists. Theories of identity have been put forward and personality tests have been developed as a way to measure and categorise identity.  All of this effort could be boiled down to trying to answer a (seemingly) simple question – ‘who am I?’ In September 2018, we (Breakdown Bolton) ran a project to explore and develop an understanding of identity based not on scientific methods or personality tests, but through art.

In this ‘identity’ project, we ran a series of workshops exploring different aspects of identity through sculpture, collage, and graphic novel. At the end of each workshop, we gave each group participant the option of sharing their piece with the group and describing both the meaning of the piece and their experience of the creative process. We recorded these discussions as a way to capture people’s experiences of the group and anything we learned about identity along the way.  We have included quotes from these discussions in this article as a way to illustrate this.

In approaching the topic of identity, we were interested in whether using art to explore identity might provide new ways of looking at ourselves. In particular, we wanted to take a look at some ‘taken for granted’ views on identity. The first of these was how personality traits are often described in terms of polar opposites: people are either easy-going or highly-strung, thinkers or feelers, outgoing or shy. 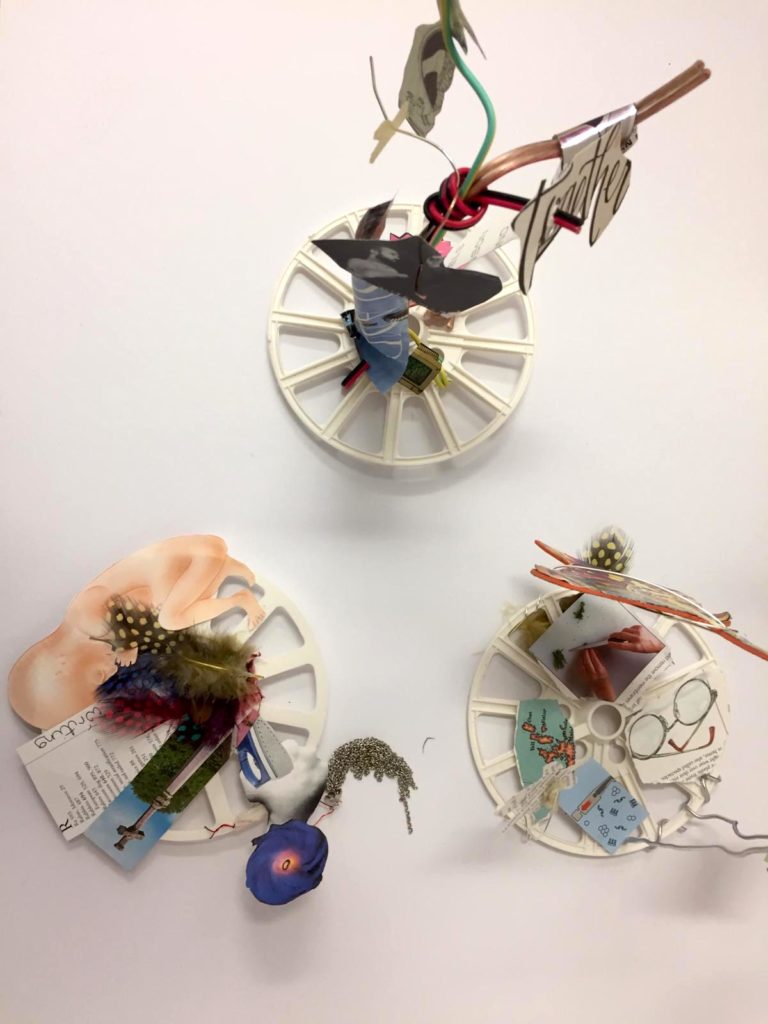 Although we know that people find this way of understanding themselves helpful, we wondered whether this view could limit people’s options for seeing themselves outside of this ‘either/or’ view. For example, people might lie somewhere in between shy and outgoing.  We wondered whether language is sometimes too limited to fully describe identity.  Instead, we used art and ideas from graphic novels to explore these themes.

In the first workshop of the project we created a ‘wheel of power’ sculpture.  The centre of this wheel represented our ‘everyday powers’, aka personal strengths, qualities, or traits; items towards the outside reflected superpowers that we wished we possessed. We then developed an ‘in-between’ which involved dialling up our everyday powers to become more like superpowers, and imagining our ideal superpowers as fairer, more realistic powers. In creating this ‘wheel of power’ we were left with a piece of art which blurred the lines between everyday and super powers. This pushed us to think about ourselves in ways outside of set categories or labels.

In the second session, we looked at multi-layered identities, building on the idea that we as humans are not defined by a single set of personality traits or qualities, but rather that we can have multiple versions of identity, some of which are not always apparent or visible.  This might mean having different identities depending on social situations or in relation to life events.  We built physical multi-layered structures, with each layer representing aspects of our identities. Interestingly, many of the pieces ended up being constructed in such a way that some layers could be viewed through gaps and spaces in the top layers, while other layers remained hidden from the eye.  This came across through one participant’s description of their piece:

We also wanted to challenge the idea that our identity is fixed and unchanging. Instead, we were interested in exploring identity as fluid and ever-changing. We wanted to look at how our identity is not just influenced by what we have already experienced in life, or what is happening to us now, but also by what we want from our lives going forwards.

To explore this idea, we used the idea of ‘key panels’ in comics and graphic novels. These are sections on the page which provide a broad view of what is happening – a landscape of a situation. In one of the sessions we developed two key panels, one which reflected their current ‘everyday’ landscape, and one which represented an ideal future landscape or situation. We then came up with ‘beats’ – panels between these everyday and ideal panels as a way to reduce the distance and create a path between everyday here-and-now and the ideal future.

We found that creating art which looked forward got us thinking about identity in terms of what might be possible for ourselves in the future. This emphasised the constantly shifting and evolving nature of identity and moved us away from looking at ourselves as set in stone. In describing their piece, one participant conveyed this sense of identity being fluid, moving from ‘what has been’ towards ‘what can be’.

‘Well the bottom of mine is really before cos I used to work in admin, a boring office job, and then I got ill and I lost my job but…Yeah sort of based her around that….getting rich and conquering the earth…That’s not me yet but still’

While each workshop focused primarily on identity, there were very few sessions that went by without the current political environment being represented in the art works, or coming up in subsequent conversations.

This is not surprising given that individuals do not exist within bubbles, but are affected by political, societal, and cultural factors. As feminist and activist Carol Hanisch wrote – ‘The personal is political’.  In the same way, the works of art about identity were not limited in content to the personal.  More ‘traditional’ accounts of identity, particularly within psychology, have viewed identity as a purely individual concept and separated it from a person’s social context. Throughout our project, the role of social and political context was an integral part of our understanding of identity as developed by the group and their artworks.

Towards the end of the project, we collaborated on a group sculpture to explore the notion of shared and collective identity. Initially, we each created our own individual sculpture representing elements of ourselves.  These individual sculptures were then joined together to form a larger, collaborative piece.  In this way, the group became something different because of each individual piece, and each individual became something different as part of the group, whilst still retaining their own uniqueness. By viewing ourselves in relation to others, and vice versa, we came to understand identity as not just an individual concept, but rather that our identity both influences and is influenced by other people – that identity is interpersonal.  Previous definitions of identity describe the concept as ‘how we see ourselves’. However, through the workshops we came to add other elements to this – that identity is also ‘how others see us’ and ‘how we see others’.

‘Did the workshops change how you viewed identity?’

‘A little bit probably…it helped as well thinking about what other people thought and what they, how they interpreted it, and about how myself and how I interpreted it…’

Identity is so often thought of as the answer to the question: ‘who am I?’ However, as we have learned throughout this creative project, identity is far too complex to be boiled down to a single question. In our opinion, we should view identity as a series of questions, some of which might be: ‘who else am I?’ (identity as made up of multiple versions of the self); ‘who have I been and who do I want to be?’ (identity as fluid, in relation to the past, present, and future); ‘who am I with?’ (identity in relation to other people); and ‘where am I?’ (identity in relation to social context).  Although this might make identity more complicated or more confusing, it also might allow for more possibilities in how we view ourselves and more choice over how we would like to view ourselves.  Of course, this is just how we have come to understand identity through this project and we would encourage others to develop their own ways of looking at identity and exploring this concept in other ways.