The BBC Panorama episode on 28th September, ‘Undercover Hospital: Patients at Risk’ exposed some of the poor practices in an NHS Regional Secure inpatient service for people diagnosed with mental health problems. Such exposés have happened before. They have resulted in the hospital being investigated, resignations and suspensions, and some people even being sacked. Sometimes they have led to bigger changes and new legislation, including wider powers for inspections. But what if this programme is only the tip of the iceberg? What if within all our mental health inpatient facilities, people are being restrained in similar ways? What if restraint is disproportionately used on women or people from different ethnicities? What if people were routinely restrained for periods of time that contradicted NICE guidelines? What would we do? What would we think? Would we begin to question the whole culture of how we see human emotional distress?

If you examine the data that the NHS publishes about restraint, use in England, it tells us that all of the above is true.

The data confirms that restraint is, in fact, disproportionately used on women and young girls and on people from Black or mixed ethnicities. It also shows that people are routinely restrained for considerably longer periods than recommended by NICE (the National Institute for Health and Care Excellence.)

And it is worth remembering that these are the recorded restraint use figures. Watching the Panorama programme, one would suspect that not all use of restraint is being recorded.

The graph shows the total restraint use for males and females, where females receive significantly more. In fact, the only types of restraint where males received more than females were Segregation, Seclusion and Chemical restraint- Oral. 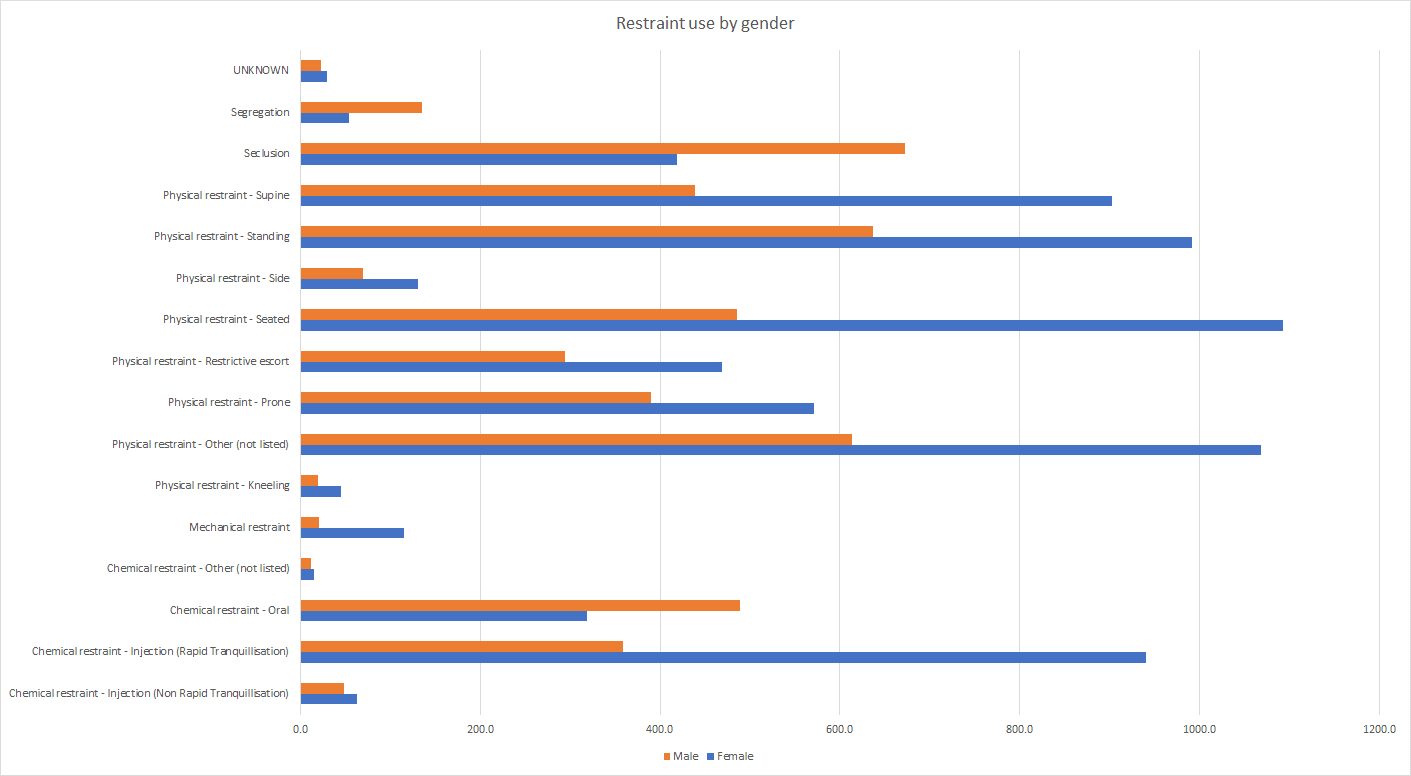 It is always important when it is looking at data to remember that every number refers to a human being in distress; people who are frightened, vulnerable, sometimes confused and in environments that are unfamiliar, and amongst people whom they don’t know. We must also remember the people administering the restraints, which is often emotionally distressing for them too. Is it possible that our psychiatric units are unhealthy environments for anyone who occupies them? Is it also possible that ineffective “treatments”, denial about the impact of the life events that lead to suffering, and an over-reliance on sedation and tranquillisation, are contributing to the figures?
Looking at the use of physical restraint generally, NICE’s guidance1 from 2015 states:

1.4.24 When using manual restraint, avoid taking the service user to the floor, but if this becomes necessary:

• use the supine (face up) position if possible or
• if the prone (face down) position is necessary, use it for as short a time as possible.

1.4.29 Do not routinely use manual restraint for more than 10 minutes.

Each month an average of 28.2% of the reported use of prone restraint was in excess of NICE guidelines – this is often the most dangerous form of physical restraint. The most commonly used manual restraint is in a standing position, and after that, in a sitting position.

Of the people being restrained in the prone position, on average 16.9% of all individuals received it for 60 minutes or more, or 405 individuals. While 14.3% of all reported uses of prone restraint were over 60 minutes, for a total of 625 reported uses. 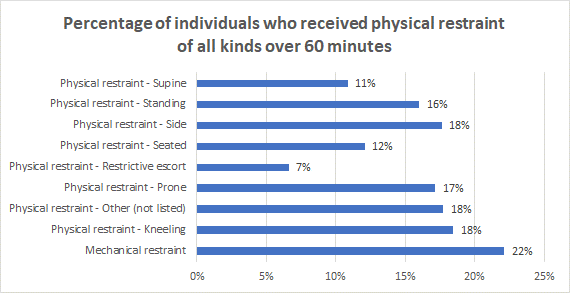 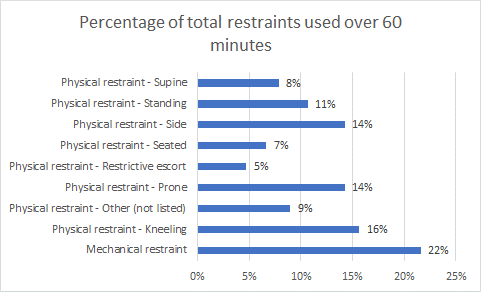 As a reminder, here again are the NICE Guidelines:

However, these numbers can be hard to relate to. For that reason, the graphs show the percentage of restraint use per 100,000 people: 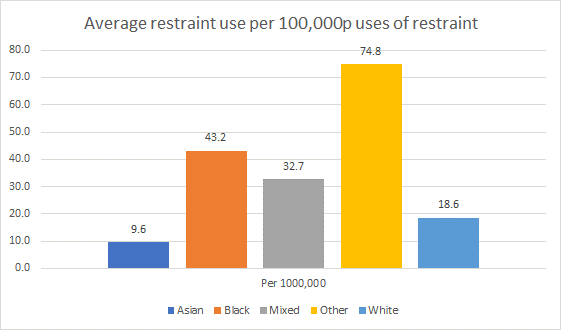 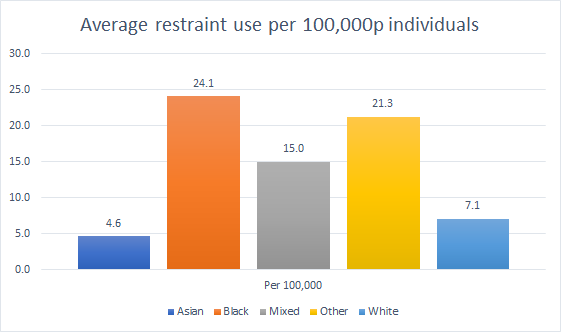 From these graphs, you can see that Black and Other ethnicities are significantly more likely than White and Asian ethnicities to receive restraint3.
The evidence from looking at these three areas of restraint use in England suggests that psychiatric practice in these units reflect the biases that already exist in our society, played out against people who are already discriminated against. It is possible that people who have already experienced trauma, abuse and discrimination, are having those experiences compounded and repeated in the way they are viewed and responded to in our services.

The data on restraint use in England throws up very important questions. Why do women and girls receive so much more restraint? Why are people described as ‘Black’ or ‘Mixed’ also receiving more restraint? Why are people being restrained for such long periods, against the recommendations of NICE?
The data on restraint tells us that we need to address a system that fails us all, by not acknowledging and responding to the events of people’s lives, and not linking those events to how people feel and what they experience. This failing mental health culture will always result in the shocking scenes such as those seen in the Panorama programme, reflected in disturbing data that the NHS itself has collected. Change is desperately needed. We need to move away from seeing distress as illness.

This model sets the scene for abuse by positioning a whole group of people as less rational, less able to make their own choices, and therefore legally vulnerable to coercion by others. Psychiatric coercion of all kinds is contrary to United Nations (2013) principles. Instead, we must acknowledge, accept, and address the fact that distress is in fact the consequence of the things that happen to us; maybe then we will show more compassion to each other and be able to offer support that people actually experience as helpful.