Editor’s Note: This post was originally published by our sister site Mad in America, and is reposted here with permission.

In 2021, I created the Facebook group “Stop Dialectical Behavioral Therapy” for mental health service users to have a space to discuss what happened to them while in DBT treatment, without being silenced by mental health providers for doing so. The group has grown to over 200 members in just a few months. I’m not surprised.

For those who are unfamiliar with Dialectical Behavioral Therapy, commonly referred to as “DBT,” it is a treatment that was first created by Dr. Marsha Linehan to be used with those diagnosed with ‘borderline personality disorder.’ A form of cognitive behavioural therapy, Linehan presents DBT as using validation as “sugar coating” so that the “distasteful medicine” of cognitive behavioural strategies goes down (Swenson, 2016, p. 688).1 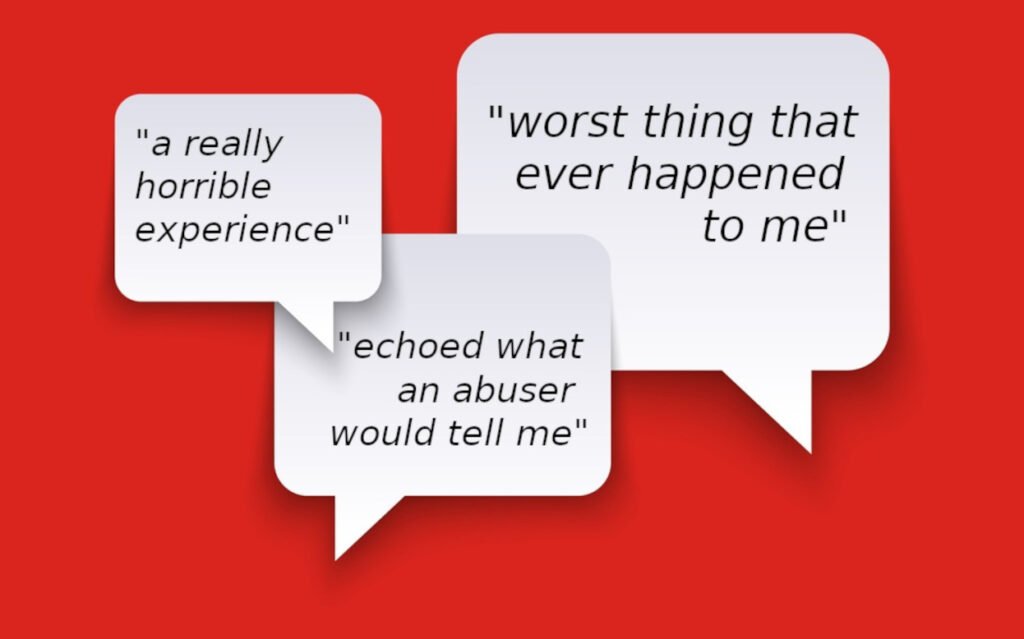 Despite the majority of the individuals being sent to DBT having histories of severe childhood trauma, little about DBT treatment is “trauma-informed.” Rather, clinicians are trained to label feelings like suicidality, restricting food, self-injury, crying, and feeling sad as “problem behaviors” and are taught to engage in irreverent responses to clients who exhibit them. Talking about trauma is often shunned, and any of the aforementioned “behaviors” are commonly viewed as attention-seeking. Despite 80-90% of individuals diagnosed with ‘borderline personality disorder’ reporting histories of childhood trauma, these individuals are merely viewed through the DBT lens as people with problems that need to change.

Not only is DBT problematic, but what happens to clients prior to starting DBT is too. Many clients report that their therapists quickly terminate them, saying they need DBT without providing them time to process why they are being sent away and all of a sudden shunned. Some report realizing that they don’t like DBT and attempting to return to their previous therapist, but being told no. This was the experience of someone in the Stop Dialectical Behavioral Therapy group who gave permission for me to share:

“My therapist terminated me because she thought I needed DBT and couldn’t provide it. This was months after I dumped all of my childhood trauma in her office. She said she would continue working with me when I completed the six-month course, depending on the report of the therapist running the group. The DBT group exceeded $2,000, which was really difficult for me to come up with, but I did. The DBT therapist said I should also meet with her weekly while in the group, and that appointment would be an additional $150 per week. I could not do that financially. I just could not. So, she reported to my therapist that I wasn’t engaging in the ‘gold standard.’ I received a letter a week later from my therapist who had said she would see me after the DBT group, and it said that she would not see me at any time in the future. So, I was left with this gaping wound of having shared all of my trauma and now it’s just sitting there all raw, and unprocessed, as I deal with a therapist who I truly trusted and really liked, thinking I’m too much for her.”

As I described in my previous personal story, I had a similar experience a few years ago when my “attachment-focused” therapist shunted me off to DBT and then terminated our relationship when I asked to see her again after not finding the DBT helpful.

When I first started the Stop Dialectical Behavioral Therapy Facebook group, I wasn’t sure if my experience of DBT was something others could relate to. When I would write about it in Facebook groups, therapists would put me down and attempt to silence me. On one occasion, a DBT therapist wrote “CALM DOWN!” in response to me merely expressing how I found DBT hurtful. I was kicked out of that group shortly after. For some reason, DBT therapists take great pride in what they call “having swallowed the DBT Kool-Aid” and will defend Masha Linehan and DBT like their lives depend on it.

I truly do not understand what we are doing with individuals with childhood trauma who do not feel well. We send them to DBT, where we tell them that their normal responses to childhood trauma are for some reason problems. It is astonishing to me that during the time of #metoo, and “trauma-informed” language being all the rage, clients continue to be subjected to this horrific treatment without anyone blinking an eye. How is it that a population with high levels of childhood trauma is being treated like witches in 2022 and nobody seems to notice or care? How is it that we are focusing so heavily on adverse childhood experiences these days and yet, many individuals with ACEs/trauma are being sent to a behavioural treatment and subjected to chain analysis of their said “problem behaviors” that supposedly do not fit the facts, when, in fact, they do? Why are we sending survivors of childhood trauma to a treatment where they are told the problem is them?

This is not just my story. Here are quotes from many others who have been traumatized by Dialectical Behavioral Therapy and have shared their stories in blogs, on Reddit, on Quora, or provided permission to share from our Facebook group:

“DBT was the worst thing that ever happened to me. I needed trauma therapy for years just to process the abuse that DBT was.” ~Anonymous

“Why do I see so many therapists recommending DBT for borderline PD when in my experience, I’ve left almost every session feeling attacked, discouraged, and unsupported? Am I missing something?” ~Anonymous, Quora

“I believe that the borderline diagnosis is the equivalent of a hate crime. DBT plays into this, blowing their own horn about being the ‘gold standard treatment for borderline’ while working to diminish, dismiss, and ignore trauma, including the trauma inflicted by the mental health system, which often mirrors and reinforces childhood trauma.” ~Anonymous

“My mom took me to dialectical behavioral therapy, where a table full of teenagers read aloud from worksheets. Not accepting pain equals suffering, a photocopy declared, insisting that our misery was a choice. Adults had decided that our problem was emotional regulation. We were to learn skills to fix our ‘bad behaviors.’ Shrinks preached the doctrine of radical acceptance, which did not seem like the best fit for my situation.” ~Emi Nietfeld from her 2022 book, Acceptance: A Memoir

“DBT infuriated [me] because it was basically telling me, ‘learn to be passively okay with outrageous unhappiness at what’s been done to you.’ We have our reactions for damned good reasons, and you’re basically treating us like car alarms you want to cut the wires on, and you want to smash it with a hammer, so you don’t have to pay attention to it. Your smoke alarm goes off, so you take the battery out.” ~Anonymous, Mad in America commenter

“I wonder who decided that DBT was the gold standard treatment for people with a borderline diagnosis. Who did that come from? Did it come from the DBT people themselves? Seems like they would be a little bit biased.” ~Anonymous, Mad in America commenter

“I am surprised that you would recommend it to me. Am I offended? Well, yes. There is certainly a diversity of intelligence levels that probably affects a person’s response to DBT, if nothing else. It is such a weird thing to encourage. Don’t diagnose me and don’t try to treat me with your condescending imaginings. I am glad I am not going back. To be in a situation where I am potentially invalidated by professionals moment after moment, to be lectured by the same people who were supposed to care for me last year, to be told again and again that I need to change my reactions, is damaging. It is damaging and re-traumatizing. I’m sick of you.” ~Elisabeth Murray, Surviving Psychiatry

“I went to an eating disorder treatment center a few years ago, and they used DBT almost exclusively. It was a really horrible experience that caused me to get worse in the long run instead of better. My trauma history involves severe abuse, including sex trafficking by a parent. Instead of helping me through it, they ignored what was happening for me and literally allowed me to drown in the flashbacks. Not having the space to talk about my trauma history meant that some really insensitive things were said that I doubt anyone would actually say to another person if they knew that person’s history. I often felt shamed for PTSD symptoms.” ~Anonymous, Reddit

“My therapist was very confrontational. I would try to bring up something that was really bothering me, and she would immediately tell me why I was wrong or that my emotions were wrong. She’d then square her shoulders back and sit up straight and I’d shut down and retreat from the session.” ~Anonymous

“I felt minimized and dismissed. It definitely felt very cold, indifferent, and unsupportive. I didn’t feel empowered in the recovery process, but instead, felt that all agency was stripped from me, and my voice was ignored.” ~Anonymous

“Before moving down to PHP, she told me that if I self-harmed once or lost a single pound while on PHP that she would have me put in a psych ward. The absolute LAST thing I needed was to be told I had to be perfect.” ~Anonymous, Reddit

“I had very upsetting experiences in DBT… some of the skills echoed what an abuser would tell me.” ~Anonymous

“I was told ‘just report it’ (CSA) to the police and then forget about it; and wasn’t allowed to include anything about it in any of the homework set. The week I did, I was asked to leave.” ~Anonymous

“You are told your emotions, ‘don’t fit the facts’ by a therapist who hasn’t experienced what you have and (in many cases) has no idea what your unique experiences of oppression have been. The therapist refuses to talk about your trauma, and instead, insists you talk about your behavior.” ~Anonymous

It is really time that the harm in this field ends. To be truly trauma-informed, one needs to understand intersectionality, developmental psychology, and the basic needs that all human beings possess. This population is not attention-seeking or obsessive. They are merely seeking to form an internal working model of secure attachment so that they may one day wander on their own. This population does not need DBT. They need developmentally informed therapy that acknowledges that trauma isn’t just what happened to you. It’s also what didn’t.