Share on Facebook
Tweet on Twitter
These images are my response to psychiatry where I have explored the frustration that is experienced as a result of a diagnostic led system. Labels put people in a box of symptoms and encourage diagnostic overshadow and 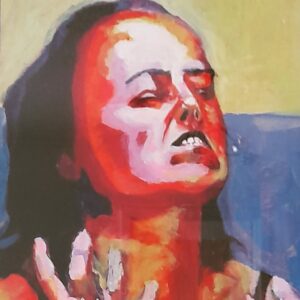 pathologization of many creative sides of a person. People receiving treatment from mental health services often do not have a voice and when a difference of opinion is shared this is another area for pathologizing leading to further reason to silence your voice. Oppression and power exist in our society enough and are often the cause of mental distress as shown in the work of Lucy Johnstone and  Mary Boyle in ‘A straight talking introduction to the The Power Threat Meaning Framework’ (PCCS Books, 2020), so why should  we expect people to go into a service where they will most likely be further traumatised rather than receiving help for the original trauma they experienced?

Overuse of damaging medication which often makes a person into someone they are not robs people of their identity alongside putting them in a box that has no real evidence, and even if symptoms are representative of a label, assessment is most often subjective from the point of the psychiatrist who never really gets to know the person in the majority of cases.

In my experience people achieve a more flourishing life and higher functioning when not under the power and control of this service. Even when treatment is not being forced onto someone it can be forcibly removed from them, particularly present in the diagnosis of ‘Borderline Personality Disorder’. It is even the case that  people may be detained under the mental health act as they are deemed to not have capacity  but then they will be told to take responsibility for themselves. Is this not a contradiction?

Yes, I believe we all should be responsible for ourselves if we can be but this contradiction just does not make sense. People given with this label who express a wondering about their sexuality are then given another ‘tick’ on the list from the diagnostic manual! Is this not discrimination? They are also said to be hard to treat/manage or difficult/challenging and are stigmatised for their ‘mental health’ from mental health services.

I would argue that anyone who is treated in the way most people are when given this diagnosis would be difficult or challenging, as I think if anyone in society is treated with such contempt then they would protest. I think people experiencing the difficulties often associated with this diagnosis are actually very responsive to treatment when treated as a human being who has feelings and

otions and past experiences that led to their distress; however psychiatry does not do this so they would not know that!