As a service user of the REST project at Mind in Camden, I want to celebrate World Benzodiazepine Day 2018 by telling the world a little bit about what REST has done for me, and for the thousands of others it has supported since it began in 1988.

REST is a support service for people who are physically dependent on benzodiazepines and sleeping tablets. It has just three staff members and runs on a budget of less than £50,000 annually, and it supports about 145 people a year. I’m one of those.

I have no memory of contacting REST when I was in cold-turkey withdrawal from a range of benzodiazepine drugs roughly three years ago. The benzos have wiped much of my memory from that time.

For the previous 4 years, I had been prescribed diazepam, clonazepam, and zolpidem by a private doctor. But the doctor never helped me, so I decided to stop seeing him — and my prescriptions stopped, too.

For months, I hardly slept a wink. Every day I walked the streets of London in a futile effort to tire myself out. I felt trapped and anxious, pacing about in limbo, unable to work, see friends or face the world.

At first, I didn’t understand I was in benzo withdrawal — I thought it was something wrong with me. But I guess I must have been googling for help because somehow, I found out about REST. It was close to where I lived.

I rang up. REST’s service manager, Melanie Davis, answered the phone, as she does on a daily basis to so many people who call for support or advice on physical benzodiazepine dependency. She invited me to REST’s weekly peer support group. 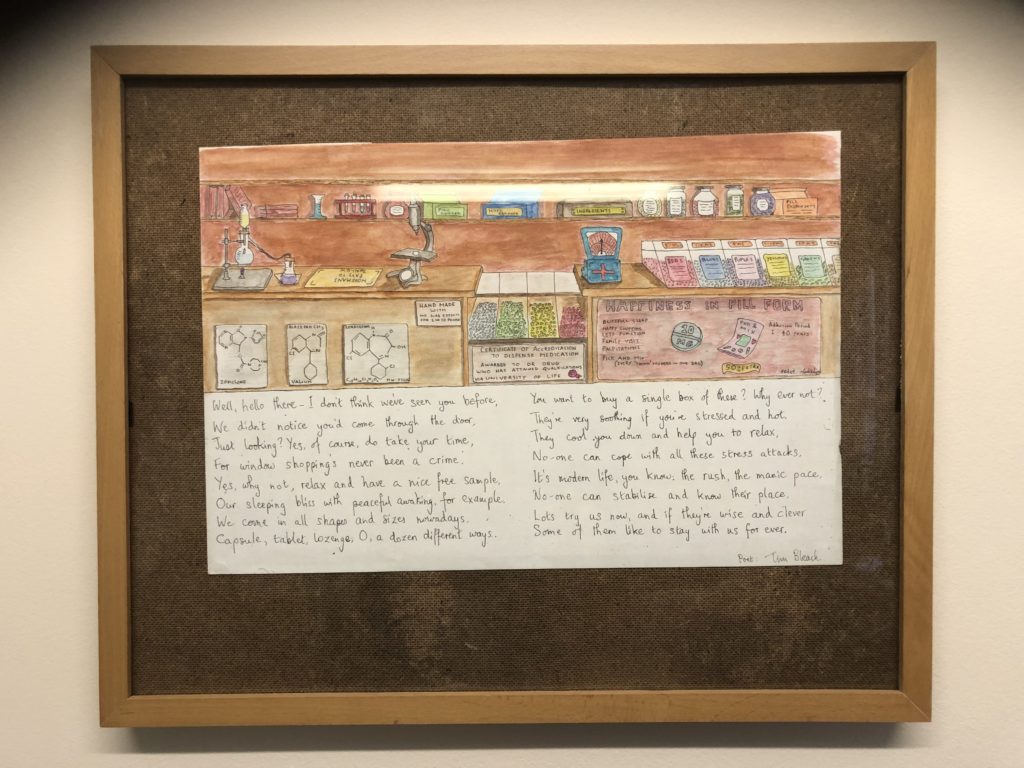 This picture hangs in the room where REST’s peer-support group meets weekly. It is a collaboration between two group members, Tim (poem) and Mark (illustration). The text reads:

Well, hello there – I don’t think we’ve seen you before,
We didn’t notice you’d come through the door, Just looking?
Yes, of course, do take your time, For window shopping’s never been a crime.
Yes, why not, relax and have a nice free sample,
Our sleeping bliss with peaceful awaking, for example.
We come in all shapes and sizes nowadays.
Capsule, tablet, lozenge, O, a dozen different ways.
You want to buy a single box of these? Why ever not?
They’re very soothing if you’re stressed and hot.
They cool you down and help you to relax,
No-one can cope with all these stress attacks.
It’s modern life, you know: the rush, the manic pace,
No-one can stabilise and know their place.
Lots try us now, and if they’re wise and clever
Some of them like to stay with us for ever.

I don’t remember the first time I ever went to the REST peer support group, either! Group members tell me that the day I arrived, I was quiet and withdrawn, and virtually unrecognisable from the person I am today.

For the past three years, they’ve watched me change, heal and grow. Whenever I feel discouraged, they remind me how far I’ve come.

The group members understand what benzodiazepine withdrawal feels like. I think they understand me better than anyone else.

I’ve attended the group regularly ever since. Some members have been coming for longer than I have, others are more recent arrivals. Every time someone new comes along, group members listen to their story and ask gentle questions. How long have they been on benzos? Why did they start taking them? What is their life like now? We each tell of our own experiences in the hope they might help. How fast or slow are we tapering? What has helped us, and what has made things harder? What emotions do we struggle with? Usually, there are lots of similarities between our stories.

When I was new, group members explained to me that they tapered slowly off benzos, many of them 1mg diazepam a month. They told me to read the Ashton Manual and decide for myself what to do.

I decided to go back on diazepam (ending my period of ‘cold-turkey’ withdrawal) and taper off slowly. For this, I needed a prescription — so I needed the help of my GP. But after my ordeal, I was terrified of doctors…

So, Melanie wrote me a letter to take to my GP. Melanie writes lots of letters like this as part of REST’s advocacy services. In my letter, she wrote that I was committed to a planned withdrawal and I deserved my GP’s support. Many GPs are understandably wary of prescribing benzodiazepines, but in my case, I needed a prescription. In the envelope, Melanie included a copy of the British National Formulary and NICE guidelines for benzodiazepines.

I planned for my taper to take a year. In the end, it took 18 months. Throughout this, I had regular support from REST’s group members and, thanks to Melanie, a reliable prescription from my GP.

Now I’m 18 months off benzos, but I still attend REST regularly to process the anger and grief I feel about what I went through, and to support those who are still tapering.

Once they feel strong enough, REST service users do lots to raise awareness of the problems associated with benzodiazepines, through talks and presentations to other organisations, including community events, charities and even the staff of large corporations! A recent example is REST members Luca and Michael who set up a stall last week at a mental health fair in Calthorpe Park, Camden, giving out leaflets for W-BAD. And there are countless other examples, too.

In the past 3 years, I’ve given talks about my experience to organisations such as Fibromyalgia UK, the Royal College of GPs, and at events such as a St Mungo’s festival for Mental Health Awareness Week 2016. Opportunities gained by virtue of being a REST member allowed me to build my confidence and give something back, so they were an important part of my recovery.

Melanie Davis raises awareness by contributing to high profile forums such as the APPG on Prescribed Drug Dependence at the House of Commons, and the British Medical Association roundtable. As you can see, REST staff and service users are raising ‘Benzodiazepine Awareness’ all year round.

Sadly, REST’s future at Mind in Camden is uncertain, and the same seems to be true for the handful of benzo services that exist in the UK.

For a more detailed picture of the situation in the UK for benzodiazepine support services, including REST, I recommend Beverley Thorpe’s recent article.

You can also learn more about REST’s situation and benzodiazepine prescribing in the UK in Harry Shapiro’s article on the Drugwise website.